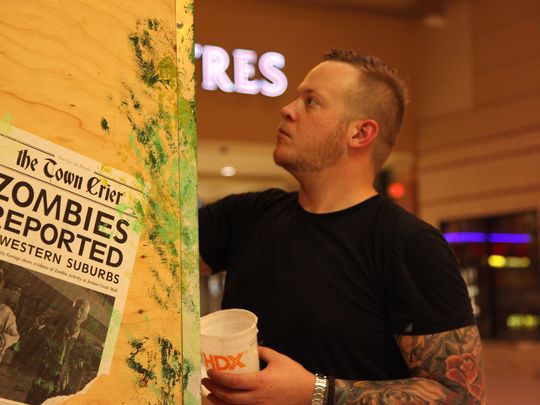 Published in The Des Moines Register

​Popular cinema has proven there's no better place for a zombie apocalypse than a food court, and local artist Van Holmgren is bringing just that to Jordan Creek Mall in West Des Moines.

Holmgren was commissioned by Zombie Burger + Drink Lab, a popular Des Moines horror-themed themed restaurant, to create a mural outside of their new store before it opens in June or July for mall goers. Boards, spray paint and other distressed items make up the mural, giving off the feeling of an imminent danger like a zombie horde coming through, or a corpse that's looking for a brain to devour.

"In all the zombie apocalypses, there's you know boarded up things to keep people out and warnings on signs to help others that are survivors," Holmgren said. "It's kind of like the decay."

For the last 10 years, Holmgren has worked as an artist in the metro. He has produced other popular works in the Des Moines area, including the new mural of "The Bachelor" Chris Soules outside of RoCA in downtown Des Moines.

For his latest piece, he hopes the mural incites a sense of fear into people walking past.

Unlike the original East Village location, the restaurant in the mall will be a smaller version, featuring 10 to 12 of the most popular burgers, like the Walking Ched and They're Coming to Get You Barbara along with fries and shakes.

It will be located in the 1,400 square feet that was occupied by the recently closed Wendy's, the closest space to the Cinemark movie theater. The space is smaller than Zombie Burger's East Village location, which has an 1,100 square foot prep kitchen.