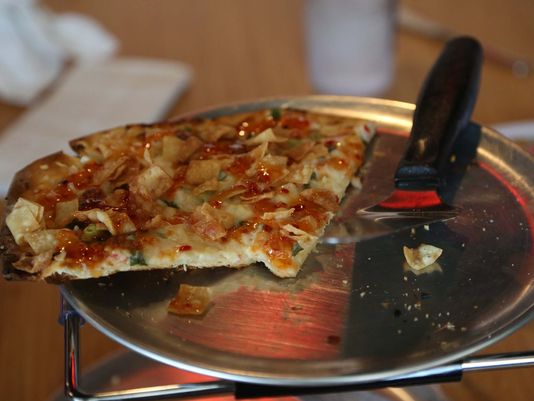 A Fong favorite, crab rangoon pizza is served up on opening day for the new location in Ankeny on Tuesday, April 28, 2015. The chinese themed pizza place is located at 1450 S. W. Vintage Parkway, Suite 120 in Ankeny. (Photo: Kelsey Kremer/The Register)

Originally based in Des Moines, the popular Asian-pizza hybrid restaurant opened its second location in Ankeny at 1450 Southwest Vintage Parkway at the end of April last year. To celebrate its one-year anniversary, the Ankeny restaurant will be holding "Fong's Fest" on June 11 with a block party planned in front of the restaurant in The District at Prairie Trail.

"Fong's Fest" will have sliced pizza, along with other foods like hot dogs and hamburgers, Sammon said. The family-friendly event will feature a beer tent, tiki bar, a kid's corner and four bands playing throughout the day. An Iowan-essential will also be present: a bags tournament.

Since it opened in 2015, the Ankeny location has sold over 100,000 crab rangoon pizzas, its most popular dish.

"It’s nice to build more and more customers," Sammon said. "Getting to know some of these people and the regular clientele have been pretty fun."

And while Fongolians have packed the restaurant wall-to-wall, there is one thing Sammon would do differently with the Ankeny restaurant:

​"If I had to do it all over again I would say we would make it bigger," Sammon said. "It's busy here a lot."
Powered by