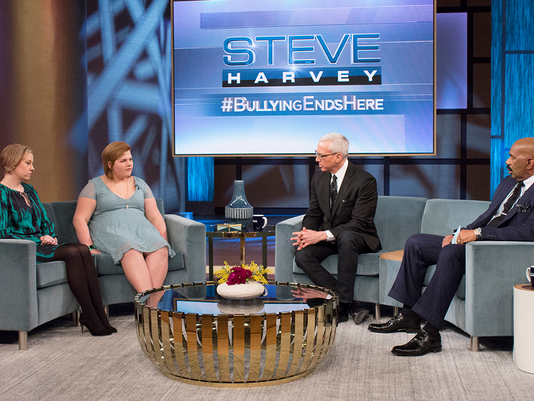 Published in The Des Moines Register
​
An Ankeny mom and her teenage daughter will share their experiences with bullying Monday afternoon on the "Steve Harvey" show.

Alisha Morton, 31, says her 14-year-old daughter, Morgan Sellers, was bullied by her classmates at Northview Middle School in Ankeny.

Morgan, a ninth-grader, was called "fat" and names like "Oompa Loompa" when she dyed her hair blue and "Miss Piggy" when she dyed it pink. One girl even encouraged her to cut herself, Morgan's mother said.

Morton said she and her daughter complained multiple time a week to school officials —  teachers, the principal and superintendent, and even school
board members — but it didn't stop the bullying.

The incidents reached a tipping point Jan. 11 when Morton picked her daughter up from school. She said Morgan was in tears and saying she wanted die.

Morton went inside the school to confront one of her daughter's bullies. An altercation took place and the mom was charged with assaulting a teenage student.

"I tried everything and the bullying didn't stop," Morton said. "I had to protect my daughter."

Morton says she only put out her hand to keep the girl away, but a criminal complaint filed by Ankeny police says she admitted to pushing the student.

Morton has pleaded not guilty to the simple misdemeanor.

"... I was protecting myself and my child," Morton said. "Honestly, even with the assault charge, I would do it all over again. I would do what I can to protect my daughter."

The "Steve Harvey" show contacted Morton after reading about her story. Morton and her daughter taped the show Feb. 16 in Chicago with Harvey and Drew Pinsky, host of the talk show "Dr. Drew On Call" and earlier programs like "Celebrity Rehab with Dr. Drew." The hourlong segment focuses entirely on bullying.

"I loved that we can get our word out there to help others," Morton said. She has created a Facebook page called Moms Against Bullies.
Morgan still attends Northview.

"I want the schools to do their job and live by their words that bullying isn’t tolerated," Morton said. "...  If they did their job correctly the first time, I wouldn’t have had to be at the school."

She said there is a formal process that students and parents can take to report bullying and the district can implement a safety plan to protect students.

"All of us who are parents want the very best for our students and we want them to feel safe, but we also want to say, it would never be appropriate for a parent to come into the school and physically handle the situation on their own with the alleged bully," Owenson said.

Morton said she and her daughter raised concerns verbally with staff members, but she didn't learn about the bullying reporting form until after the confrontation at the school.

​Owenson said there are currently no open bullying complaints in the district.
Powered by